Silk Way West Airlines has received IATA certification. The airline has maintained its high level of performance during the COVID-19 pandemic, fully meeting international flight safety standards throughout this period of increased air cargo demand. A member of the International Air Transport Association (IATA) since 2015, Silk Way West Airlines successfully passed the latest audit procedure and once again confirmed its compliance with IATA Operational Safety Audit (IOSA) standards and received IATA certification. According to the results of the inspection, held online for the first time, Silk Way West Airlines proved for the fourth time that it meets all international safety requirements for air cargo.

Founded in 2012 in Baku, at the heart of the Silk Road, Silk Way West Airlines is the largest cargo airline in the Caspian Sea region. Based at Heydar Aliyev International Airport, the airline operates around 350 monthly flights across Europe, Asia, and the Americas via its fleet of 12 dedicated Boeing 747-8F and Boeing 747-400F freighter aircraft. On April 28, 2021 Silk Way West Airlines signed a strategic fleet expansion agreement with Boeing for five state-of-the-art 777 Freighters. The airline’s annual cargo turnover exceeds 420,000 tons, while its growing route network covers over 40 destinations across Europe, the CIS, the Middle East, Central and Eastern Asia.

IATA certification content provided by Silk Way West Airlines for which GFS is the exclusive GSA. 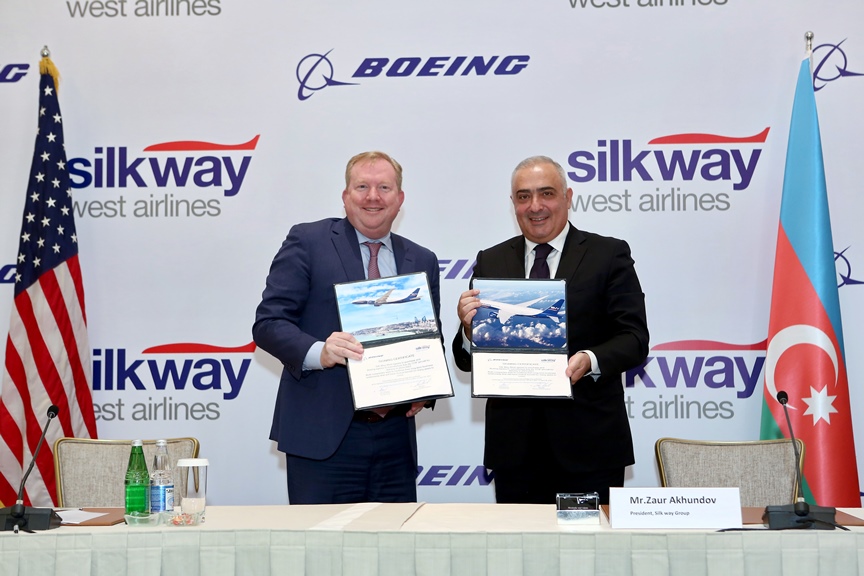 Silk Way West Airlines has signed a purchase agreement with Boeing to expand its fleet. The agreement was signed at a ceremony in Baku on April 28, 2021 attended by Mr. Rashad Nabiyev, Minister of Transport, Communications and High Technologies of the Republic of Azerbaijan, Mr. Zaur Akhundov, President of Silk Way Group, Ambassador Extraordinary and Plenipotentiary of the United States of America to the Republic of Azerbaijan Earle D. Litzenberger, Mr. Stan Deal, President and Chief Executive Officer of Boeing Commercial Airplanes. The investment marks a further step in Silk Way West Airlines’ expansion of its international network to meet growing demand for cargo transportation.

According to the agreement, Silk Way West Airlines will purchase five state-of-the-art Boeing 777 Freighter aircraft, with delivery planned over 2023-2027.

This is the first order for Boeing 777 Freighters in the Central Asia and Caspian region. The Boeing 777F is the largest twin-engine freighter on the market, with a range of 9,200 km and a maximum payload of 102,000 kg. As the world’s most efficient and environmentally friendly freighter, the latest additions to the Silk Way West fleet will contribute to the airline’s sustainability goals, as well as being a particularly cost-effective option in terms of maintenance and operating expenses.

“We welcome the signing of the contract between Boeing, the world’s leading aircraft manufacturer, and Silk Way West Airlines, Azerbaijan’s premier cargo airline. We envision an integrated transport network in Azerbaijan, and airline transportation plays a critical role in this. I believe this contract will help solidify Azerbaijan’s position as a regional transportation hub and a reliable airline partner in international trade and commerce,” said Mr. Rashad Nabiyev, the Minister of Transport, Communications and High Technologies of the Republic of Azerbaijan.

“The signing of this agreement is a new milestone in the growth of our company. I am confident that the acquisition of these new aircraft and the start of this project will further strengthen the company’s leading position in the global air freight market for the next 15-20 years,” said Mr. Zaur Akhundov, President of Silk Way Group.

“Silk Way West Airlines has been rapidly expanding the geographic reach of their network. With the global air freight market forecasted to grow more than 60% over the next 20 years, this new order bolsters their ability to meet trade and e-commerce demand in CIS, Europe, Middle East, Asia and North America. We are honored to partner with them and look forward to introducing the market-leading efficiency and capability of the 777 Freighter to its existing fleet of 747 Freighters,” said Stan Deal, president and chief executive officer of Boeing Commercial Airplanes.

The deal marks a further step in Silk Way West Airlines’ ambition to broaden its footprint on the global cargo market, and reinforces the already strong relationship between the leading air freight carrier in the Caspian region and the world’s largest aerospace company.

Founded in 2012 in Baku, at the heart of the Silk Road, Silk Way West Airlines is the largest cargo airline in the Caspian Sea region with the annual cargo turnover of 350,000 tons. Based at Heydar Aliyev International Airport, the airline operates around 350 monthly scheduled flights to over 40 destinations worldwide.

Boeing is the world’s largest aerospace company and leading provider of commercial airplanes, defense, space and security systems, and global services. As a top U.S. exporter, the company supports commercial and government customers in more than 150 countries and leverages the talents of a global supplier base. Building on a legacy of aerospace leadership, Boeing continues to lead in technology and innovation, deliver for its customers and invest in its people and future growth.